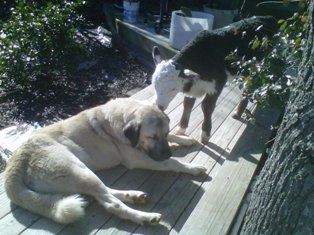 I had been told that the Livestock Guardian Dogs (LGD) would kill dogs that got into the pasture. My Rat Terriers can get into the pasture and the first time they did was comical. They were barking fiercely at Mowgi and he wanted to play. But make no mistake about it, strange dogs must be introduced and supervised.

They definitely are a team act with the goat protection. We have a neighbor that will stop by occasionally and he normally has his dog with him. The dog stays on the truck but you will see Mowgi running the fence pacing the truck and Callie is at the other end of the pasture with the goats. AWESOME. We have had no Bobcat, Raccoons or Mountain Lions. We did have a skunk which I only know because of the odor that Mowgi sported for a few days. And we had a coyote that was getting into the pasture but it was very awesome to see Cricket bringing the goats in from the back pasture while Mowgi was chasing it out of the pasture. The coyote jumped over the fence. We told our state trapper about it and his comment was "if that dog was chasing me, I could jump that fence too". The coyote was only coming in when we let the dogs out. This was the middle of the day when we let our guard down. Well he did it one time too many times and he found out how good of a shot I am. We also found the hole where he was getting in and fixed it. We did lose a couple chickens to him.

I sleep better knowing that the herd is protected and if I'm needed the LGD will let me know. AWESOME.

We added chickens to our group in early 2013. Our previous flock of chickens were wiped out by Raccoons and Coyotes. This was several years ago before we got the Anatolians. I ordered over 40 chicks from a mail order hatchery expecting that I would lose a few. We lost one the first day and we lost a couple more since then but not a one was lost to predators. Mowgi and Callie took to the poultry guardian duties immediately.

I also have to give Mowgi and Callie credit for alerting us to the neighbor's dogs killing our Dexter calves. The neighbors allowed their dogs to roam free and two calves were killed by them. Mowgi and Callie barked everytime with their alert bark that tells you that you need to do something. Each time they did this we found the neighbors dogs running in our front pasture. Fortunately after involving the local sheriff and animal control, one dog is gone and they appear to be keeping the other dog home. And we pay very close attention to the LGD.

Anything I write here is just going to be a rewording of what is found on the internet. Instead I am including helpful links to other sites. If you have goats/sheep or other animals that need protecting, I highly recommend the Anatolian. As for me, I don't know how we went as long as we did without them and I don't intend to ever be without them again. They are very protective of their herd but I also have no doubt that if I was in danger, these dogs would do whatever it took to protect us. You can ask my neighbor who came in unannounced when Mowgi was out. He wasn't hurt but Mowgi definitely let him know he was being watched and I'm doubtful of any surprise visits again.

When getting your Livestock Guardian Dog (LGD), please make sure you purchase from a reliable working farm/ranch. I am so disgusted by the number of posts/ads I see from people selling LGD that are mixed with Pit Bull, Rottweiller, Australian Shepherd, etc. To be a REAL trustworthy LGD they must be from a Livestock Guardian Dog Breed. A LGD is a dog type bred for the purpose of protecting livestock from pedators. They don't herd. Herding dogs control the movement of livestock. LGD will blend in with their herd. Their ability to guard their herd is mainly instinctive. This is not a trait that can easily be taught.